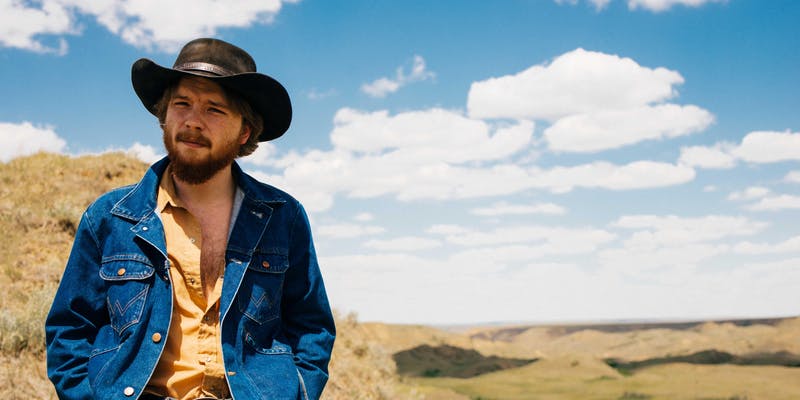 Due to inclement weather on the road to Crested Butte, Colter Wall’s show February 16 at Public House was postponed. The new date is Sunday May 26th. All tickets will be honored at the rescheduled date, refunds can be issued at your point of purchase.

After two years of relentless touring, Colter Wall wanted to make an album about home. Drawing on the stories of Saskatchewan, Canada, the young songwriter’s corner of the world takes shape throughout his second full-length album, Songs of the Plains. Produced by Dave Cobb in Nashville’s Studio A, the project combines striking original folk songs, well-chosen outside cuts, and a couple of traditional songs that reflect his roots growing up in the small city of Swift Current.

“One thing I’ve noticed over the last few years, in the United States and playing in Europe, is that people all over the world really don’t know much about Canada at all,” he says. “When you talk about Saskatchewan, people really have no idea. Part of it is because there are so few people there. It’s an empty place—it makes sense that people don’t know much about it. But that’s my home, so naturally I’m passionate about it. With this record, I really wanted people to look at our Western heritage and our culture.”

Indeed, Wall captures the spaciousness of the Canadian plains by relying on minimal production and his resonant baritone, which he’s strengthened into a mighty instrument in its own right. It’s a deep and knowing voice you wouldn’t expect of a man who’s not yet 24 years old.

Songs of the Plains begins with “Plain to See Plainsman,” a sincere portrait of a man whose rural heritage follows him into the greater world. As Wall lists the kinds of people he meets on the road – beautiful women, bikers, junkies, hippies—it’s easy to imagine the autobiographical component. The darkly comical “Saskatchewan in 1881” recalls a stubborn encounter between a Toronto businessman and a steadfast farmer who cultivates the province’s land. And although Wall racked up a body count on his prior album, this time he stops just short of killing the title character in “John Beyers (Camaro Song),” which he says is inspired by true events.

Evoking the most remote reaches of the plains, “Wild Dogs” sounds like a cinematic Colter Wall composition, but he actually first heard the song in Little Rock, Arkansas. Wall had just finished soundcheck in the fried chicken restaurant where he had a gig, when his buddy Ron Helm (nephew of Levon Helm) dropped in with Billy Don Burns, an esteemed songwriter who’s had cuts with many of the country legends of the 1970s. Burns wanted to pitch a few songs, and since the restaurant didn’t have a green room, Wall crawled into Burns’ backseat to listen. He found himself captivated by “Wild Dogs,” which has a minor-chord progression, no rhyme scheme, and the unique perspective of being told from the dog’s point of view.

As a folk singer, Wall places equal importance on crafting songs as well as carrying older songs into the present day. “To me, a folk singer is somebody who sings folk songs—and it’s also someone who is writing their own music, while taking something from traditional folk songs. It’s somebody who sings those songs and is aware of passing down the traditions, whether it’s from their own version of the song or taking those old tunes and reinventing them.”

That sense of tradition is part of the reason he recorded Canadian folk hero Wilf Carter’s “Calgary Round-Up,” a snapshot of the iconic Calgary Stampede. Wall considers that annual event a cornerstone of Western Canadian culture because it pulls in families from the whole region. Besides that, he says, “I wanted to have a rodeo song and that one seemed to be perfect.”

To make it his own, he put a Western Swing feel to it and brought in steel guitarist Lloyd Green and harmonica player Mickey Raphael. The Songs of the Plains sessions also featured Chris Powell on drums and Jason Simpson on bass, with Colter and Cobb sharing acoustic guitar duty.

Through his favorite folk singer, Ramblin’ Jack Elliott, Wall discovered “Night Herding Song.” Because the song was a cappella, and because Wall doesn’t wear headphones when he records, he couldn’t nail down the campfire vibe inside the sprawling Studio A. So, for this track only, he went to Dave Cobb’s house, started a fire in the outdoor fireplace, and recorded it on the spot. The immediacy of his voice is unmistakable.

Wall says he spent the last three or four years trying to get better as a singer. By putting in the work, his range is now far more dynamic and expressive. He describes the vocal development as “less gravel, without losing the baritone that I’ve developed over the years.”

Meanwhile, Wall’s ability as a songwriter is especially clear in the second half of Songs of the Plains. “Wild Bill Hickok” distills that legendary gunfighter’s epic life and death into less than three minutes. Asked about inspiration for the song, Wall cites the HBO series Deadwood, as well as Tex Ritter’s “Sam Bass” from the cowboy singer’s 1960 album, Blood on the Saddle.

While “The Trains Are Gone” laments the loss of an era, “Thinkin’ on a Woman” hints at a heartbreak as a truck driver concocts a lethal combination of whiskey, wine, and a mountain road. Wall turns far more introspective on “Manitoba Man,” a devastating song he wrote about a dark period in his life. The desperation in that track quickly gives way to the outrageous traditional song, “Tying Knots in the Devil’s Tail,” featuring verses from Blake Berglund and Corb Lund, spoons by Chris Powell, and a weird bottle of tequila by Dave Cobb.

“I went into the studio and knew exactly the story I wanted to tell,” Colter says of Songs of the Plains. “That made it easier on a sonic level and a musical level, to be able to tell Dave that it’s a record about my home. That changes it at the roots level because it’s like having a mission statement, saying, ‘All right, let’s make a Western album.’”