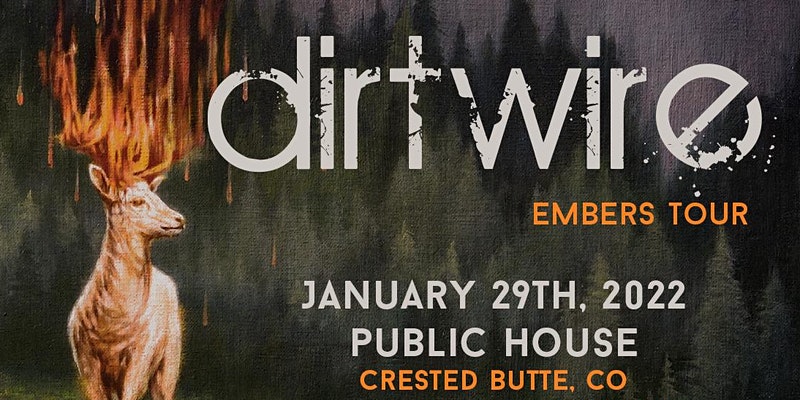 Dirtwire is back at Crested Butte Public House January 29th 2022!
All ticket holders to Public House Shows must provide proof of full vaccination against COVID-19 or proof of a negative COVID-19 test result taken within 48-72 hours prior to when doors open for each show.

Dirtwire stands poised between ancient Mother Earth and modern technology, a blend of ethnomusicology and the psychedelic trance state, gut-bucket delta blues and what the band variously dubs “back-porch space cowboy blues, swamptronica, and electro-twang.” It’s a sound informed by Dirtwire’s travels and performances around the globe, where East meets West and North joins South. From the favelas in Brazil, Femi Kuti’s Shrine in Lagos, Tokyo’s bluegrass clubs, Ayahuasca ceremonies in Central America, Gamelan performances in Bali, desert festivals in the Australian Outback, and the 20th anniversary of Kazakhstan’s modernized new capital Astana, the band spreads its message by building bridges across musical cultures in their own unique way. Dirtwire plays an array of instruments both ancient and modern, including West African kamale ngonis, jaw harps, space fiddles, whamola basses, Rickenbacher electric 12 string guitars, bowed Banjos and mouth harps from around the globe, all interwoven into modern laptop beat creation. Hailing from the underground west coast electronic bass music scene Dirtwire finds itself at the forefront of experimental electronic music production mixing in their wide array of world instruments with sampled beats and 808’s. Dirtwire’s live shows are a communal psychedelic journey, which have been channeled into their latest full-length effort, Electric River.

Electric River explores Dirtwire’s ritualistic practice of taking psilocybin mushrooms and conjuring musical transmissions from other dimensions. From the seeds of their self titled first album, all the way through Electric River, Dirtwire has cultivated a relationship with psychedelic mushrooms as a way to amplify the band’s creative expression. The album cover, by artist and friend Carey Thompson, depicts a representation of Maria Sabina, a southern Mexican shaman from the Sierra Mazatec. Sabina is acknowledged as the first person to popularize mind-altering mushrooms in the ‘50s and ’60s, after being introduced to the west by noted ethnomycologist Gordon Wasson in 1955. “It’s our homage to the feminine origin of the psychedelic movement,” says Mark Reveley, noting the ambient ethereal song on the album named after her. “That’s a huge part of our creative inspiration,” says David Satori. “We feel it opens up a door to connecting to the elusive great mystery of life, in a different and more profound way. Our senses are heightened to the infinite potential of sound.” “The key is to make sure everything is plugged in before you drink the magic tea,” laughs Evan Fraser.

Produced by the band, Electric River was recorded in several studios around California. The album is a sonic travelogue that takes you from the Central African forest (the mouth bow and Iboga ceremonial chanting of “Talking Bird” performed by the celebrated musician, Mbilou), to the swamps of Mississippi (the dirty cigar-box blues on “Cannonball”), from the prophesized conjoining of North and South America (the soulful cry of the harmonica and pulsing Brazilian rhythms in “The Eagle and the Condor”), to the Indian-Appalachia-Jamica crossover point (the Hindustani dancehall folk-step of “Strength In One,” with lyrics and vocals by tour mate Trevor Hall), to the gentle folk ecstatic shoegaze confessional “Seem to Freeze.”

Dirtwire aspires to be a collaborative celebration of the planet’s musical diversity, a testament to the power of music to reach across barriers as well as a powerful call to get up and hit the dance floor. “We’ve created a space where we’re all able to bring our individual creative contributions to the table,” says David about Dirtwire’s continued progress as a recording and performing band. “Mark has really pushed us to a more high-energy, up-tempo place in terms of the production and sound.”

“I love seeing where we can take things energetically in the live show” says Mark. “We put a lot of time and thought into figuring out how to shape our set dynamically, and how to maintain a strong sense of flow as we transition from track to track. From navigating tempo shifts to instrument changes, we love the process of creating a cohesive journey for both us and the audience.”

At the heart of the Dirtwire experience is their live show. “In our live show we try to explore the seamless interaction between live instrumentation and computer production, where the laptop is just another member of the band.” says Mark. With wide-brimmed spaghetti western hats and all-black Johnny Cash attire giving them a distinct mojo, Dirtwire are a riveting visual, as well as audio spectacle. All three members were raised on islands, David grew up a Phishhead and jazz guitarist on Grand Isle on Lake Champlain near Burlington, Vermont, while Evan comes from Orcas Island in Washington state across the border from British Columbia and Mark’s childhood home was Bainbridge Island across from Seattle.

“I was really turned on to world music as a teenager,” recalls David. “I was into gypsy and North Indian classical music, and African rhythms. Bridging cultures through music is the biggest influence for me. The instrument is the vehicle to communicate a different take on reality. We celebrate music as the universal language as we try to tell a story using all its different variations and turn people on to that.”

“Collecting these instruments and teaching myself how to play them is the most fun part for me,” says Evan, who was classically trained on piano, but now plays kalimba, melodica, harmonica, multiple mouth harps, kamale ngoni and assorted percussion among the more than 200 instruments he’s acquired from around the globe. “I’ve always been attracted to unique musical tones. The idea is how do we weave these music cultures from different continents together through different instruments into the common denominator of electronica. A major part of the creative process for us is just following our ears and inspiration.”

Mark got turned on to world music after hearing Macedonian bagpipes, which set him on the path leading to Dirtwire. “I had a walkabout journey through West Africa and India studying music that really opened my mind” Mark says. “I came back and immediately got into electronic music, and have been exploring the overlap ever since.”

The three met through their shared appreciation for global sounds and instruments, playing in several bands together and in dusty bonfire drum circles at Burning Man, while students at L.A.’s CalArts school of music. After relocating to the Bay Area David and Evan morphed from their college “psychedelic space-funk jam band” The Funnies into Dirtwire. Electric River will be their 8th album to date.

The group is passionate about supporting the One Mic project alongside LEAF, a non-profit based in Asheville, NC. One Mic initiates collaborations with musicians from all over the world, with the goal of building micro-studios and donating new recording technology to underserved communities around the world. Dirtwire is also committed to standing in solidarity with indigineous peoples and encouraging a natural relationship to living in harmony with the Earth.

“We are living out our dreams,” adds Evan. “We are grateful to have performed in Europe, Asia, Australia, Central America, and are planning to play in South America next year. We feel honored to continue our mission of celebrating the world’s unique and diverse musical cultures into our own unique expression.”

“We want to flow all of our musical influences through the Dirtwire prism,” continues Mark, “and see what comes out the other side.”