All ticket holders to Public House Shows must provide proof of full vaccination against COVID-19 or proof of a negative COVID-19 test result taken within 48-72 hours prior to when doors open for each show.

Based in Chicago and Nashville, Kick The Cat is an internationally renowned fusion quartet. Musically, the band falls within the virtuosic lineage of classic fusion and prog ensembles like Return to Forever and Weather Report but draws on contemporary groove elements, electronics, and a healthy dose of humor. The result is a heady, yet approachable, combination of mind-bending rhythms, harmonies, and kaleidoscopic textures. 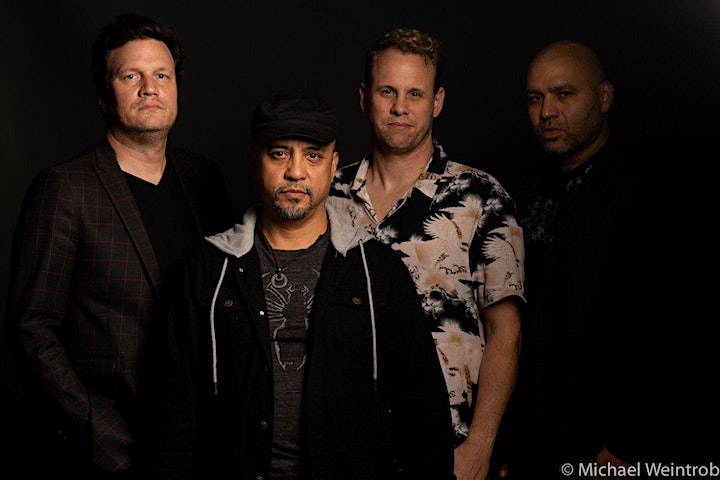 The band formed while in college in the late 1990s, performing one another’s unique and challenging compositions. At the time, the four musicians lived together and worked on their music while also individually making names for themselves in the Chicago music scene. Over the last twenty years Kick The Cat has released three full length albums of original material and has performed hundreds of shows, headlining and opening for national acts such as Umphrey’s McGee, Vital Information, Oz Noy, Jazz Mandolin Project, John Novello, Stu Hamm, and more. KTC has long been noted as being one of the most engaging ensembles to emerge from Chicago’s richly varied scene.

Drummer Kris Myers is a founding member of KTC (performing on the first two albums) but left the band in 2003 after being recruited by now-renowned jam band Umphrey’s McGee. He was temporarily replaced by Tom Hipskind (Hamilton, Brian Culbertson), but has rejoined the original lineup for the current album and shows. Guitarist Chris Siebold is a well known prodigy and in-demand session player in Chicago who has also performed regularly with Howard Levy and Garrison Keeler’s Prairie Home Companion. Keyboardist Vijay Tellis-Nayak has performed with many greats including Marcus Miller and Jennifer Hudson and was featured in 2007’s Keyboard Magazine for KTC’s “Scramble” album as Unsigned Artist of the Month. He is also one of the owners and producers at Chicago’s Transient Sound Recording Studio. Bassist and multi-instrumentalist Chris Clemente is one of the most sought after musicians and educators in Chicago and has performed with many greats including Jon Secada, Randy Brecker, and Kanye West

KTC’s new album “Gurgle” (due out June 2021) is a long awaited tour de force. It’s varied style takes you from 70s-style fusion to Rio’s Carnival, from dub-step to RnB, and from Zappa to country, all the while telling a story in a humorous, ponderous, and delightfully irreverent tone.